Bush Hill Elementary School was organized in the summer of 1954 and operated out of Franconia Elementary School beginning in September of that year while our school was under construction. Bush Hill Elementary originally had just seven classrooms and was built by the John L. Reid Construction Company at a cost of $210,000. Our school was completed during the winter of 1955 and classes moved into the building in late February or early March of that year. Our first principal was Ruth N. Hindman. Some of the teachers that first year were Lillian P. Browning, Joan F. Milam, Pauline G. Jensen, Elizabeth M. Talbert, Leonore P. Augarten, and Mrs. Zachman. Their salaries ranged from $3,200 to $3,900.

What's in a Name?

Learn about the origin of our school's name in this video produced for Fairfax County Public Schools’ cable television channel Red Apple 21.

Bush Hill Elementary School opened during the post-World War II period known as the baby boom. In September 1950, there were 16,163 children enrolled in Fairfax County Public Schools (FCPS). By September 1960 that number would climb to 59,870. During this time period, the United States Congress appropriated financial aid to school districts impacted by the growth of the federal government workforce.

In November 1954, FCPS applied for federal aid to build a seven-classroom addition to Bush Hill. In May 1955, $168,906 was secured from the U.S. Department of Health, Education and Welfare's Office of Education, and in July the John L. Reid Company was again contracted to build the addition. Construction began in late summer as Bush Hill staff readied for the opening of school.

There was a high degree of teacher turnover during this time period in FCPS and Bush Hill opened its second year with an entirely new teaching staff and principal. The teachers were Julia A. Morse (who also served as principal), Lulu R. McFarland, Cossette A. Colon, Alice D. Simonson, Irene S. Warren, Ann H. Westland, Anna A. Glasper, and Margaret W. Pearson. Their salaries ranged from $3,400 to $4,700, except for Morse who earned $6,300 that year.

The next major change to come to Bush Hill Elementary School happened in the early 1960s. When Bush Hill opened, public schools in Virginia were segregated by race. Bush Hill was built to serve the rapidly expanding white suburban communities near Franconia. At that time, the few African-American children living in our area were bused to Drew-Smith Elementary School, an all-African-American school located at Gum Springs on Route 1. All racially segregated public schools in Fairfax County were closed at the end of the 1965-66 school year, marking the beginnings of the ethnically and culturally diverse Bush Hill school community we know today.

Explore the evolution of Bush Hill Elementary School in this series of photographs courtesy of Fairfax County's GIS & Mapping Services. 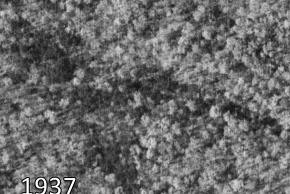 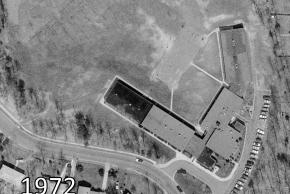 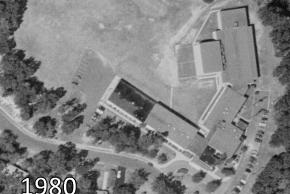 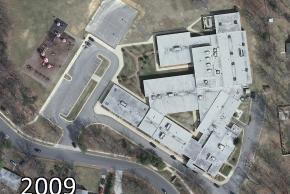 In the fall of 1977, construction commenced on a third addition to our school to house the Bush Hill Center for the Physically Handicapped. In April 1985, the Washington Post reported that Bush Hill was lauded by Instructor magazine for pioneering mainstreaming in FCPS.

An experiment in 'mainstreaming' physically handicapped students has garnered Fairfax County’s Bush Hill Elementary School the accolade of 'A-plus school' from Instructor magazine, one of the nation’s leading publications for elementary school teachers. Behind the school’s modest, early 1950s facade is two schools in one: Bush Hill Elementary School and The Bush Hill Center for the Physically Handicapped, which works with 28 handicapped students. Some have cerebral palsy, some have spina bifida, but all are mainstreamed–mixed with the general student population–as much as possible. Bush Hill is one of five county schools that have special programs for the physically handicapped. All of the school’s students are brought together for lunch, assemblies and field trips. Special education students spend as much time as possible in the general education classes. All students share a gym, computer room and music room, all located in the Center which was added to the original school in 1978. One of the center’s aims is to get students prepared to return to their base school. They come from schools throughout southern Fairfax County. A high degree of cooperation among teachers and staff, divided into several teams, each meeting frequently, is how mainstreaming is practiced at Bush Hill.

Today, inclusion is part of the daily culture at Bush Hill Elementary School. Our Physical Disabilities Center (PD) evolved into a PD program, and finally an Intellectual Disabilities (ID) program. During the 2016-17 school term, a peer mentor program was established to foster understanding and create a culture of inclusion for all students. Students with intellectual disabilities are paired with fourth and fifth graders who offer social and academic mentoring during morning meeting, buddy reading, and recess. The program has resulted in a number of new friendships and connections, gains in self confidence, and the ability to share interests and experiences with new friends. In 2017, our school added an Early Childhood Class Based Program, which, along with our Preschool Autism Class, allows Bush Hill to offer services to preschool students with disabilities. Our Special Olympics Unified Team was also established in 2017. Bush Hill's Unified Team was the only elementary school team to compete in two sports, basketball and track and field. In February 2018, the Fairfax County School Board voted to open an Advanced Academics Program (AAP) Level IV Center for the Edison High School pyramid at Bush Hill starting with the 2018-19 school year. You can read more about this exciting new chapter in our school's history here.